33% resolved at Registration and Referral stage 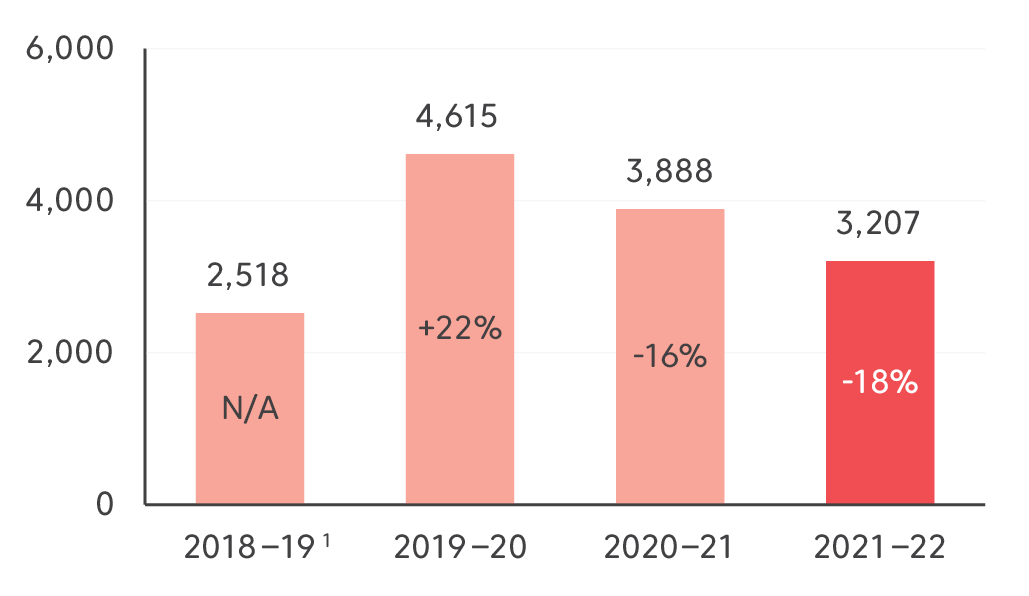 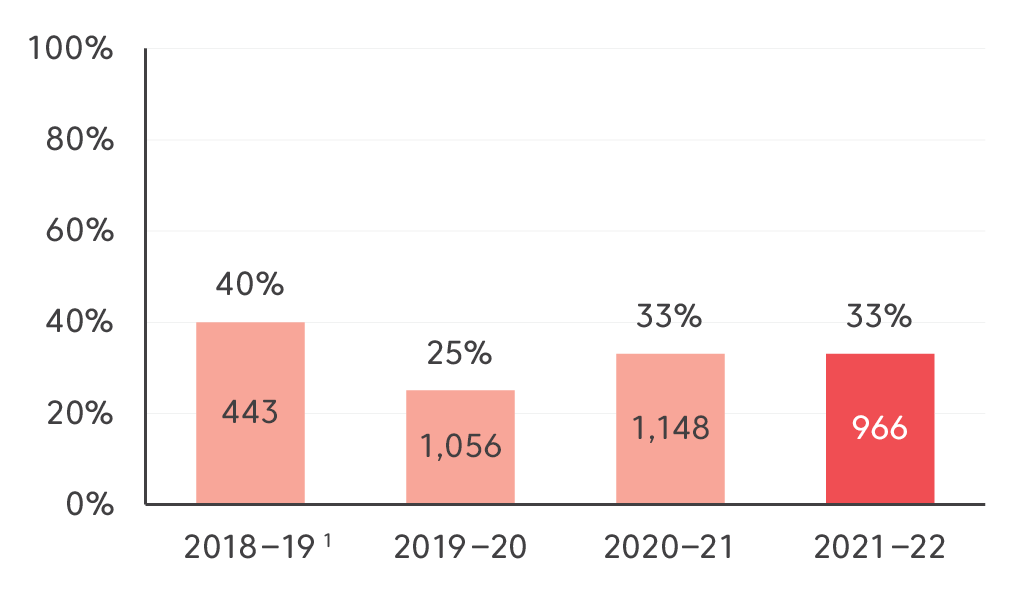 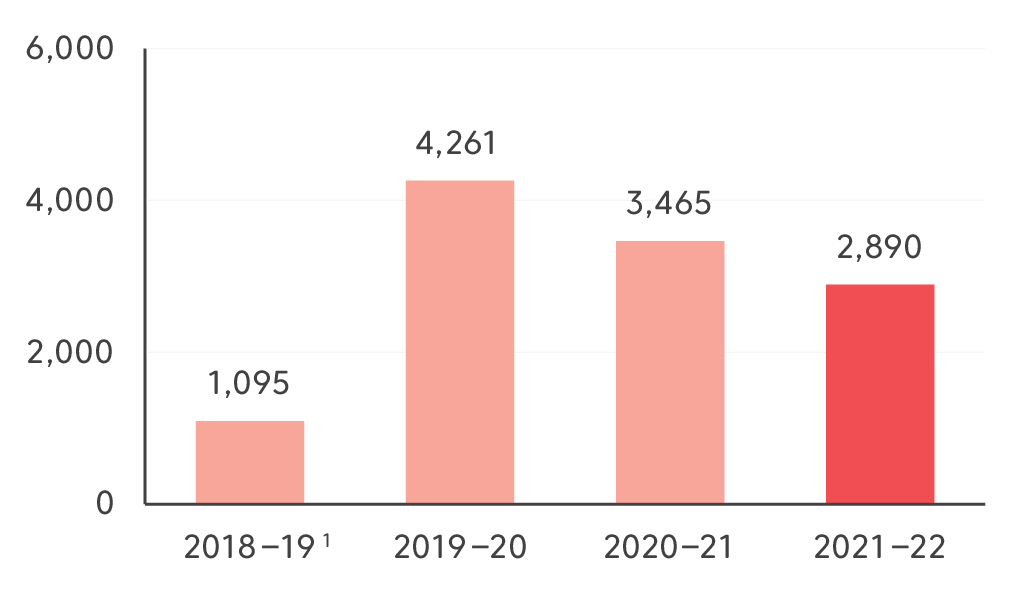 Average time to close a investments and advice complaint in days

Stage at which investments and advice complaints closed

AFCA can consider complaints about the following investments and advice products:

The types of issues and problems AFCA can resolve include:

AFCA received a total of 3,207 investments, and advice complaints in 2021–22, which was 4% of the total complaints received by AFCA.

There were 2,890 investments and advice complaints closed during the year.

Forty-six per cent of complaints were closed within 60 days. However, the average time to resolve a complaint was 106 days, which reflects the complex nature of complaints in the investments and advice space.

The most complained about financial firm types in relation to investment and advice products were foreign exchange dealers (568), followed by financial advisers/planners (506) and derivatives dealers (417).

Shares (669) and contracts for difference (646) were the most complained about products.

The top issues raised were interpretation of product terms and conditions (654) and service quality (570).

The industry can continue to reduce complaints overall by effective communication with clients, and ensuring consumers understand the products they are entering. In the contracts for differences space, AFCA has a number of disputes regarding ASIC’s Regulatory Guide 227 Over-the-counter contracts for difference: Improving disclosure for retail investors.

Financial firms should continue to work on their procedures to ensure consumers are suitable to trade these complex products.

There continues to be significant improvements in the financial advice area as standards have lifted; however, some firms continue to resist cooperative engagement with AFCA, which leads to detrimental outcomes for consumers and the relevant firm alike.

Many of the disputes in this area are due to systemic issues with a business model, often involving a conflict.

“You did an incredible job with my case, as I didn’t think I was going to get any money back, so thank you again for your hard work and dedication in pursuing my case and having an amazing outcome for me.”

The complainant held a cryptocurrency trading account with the financial firm. He said he was the victim of an initial coin offering (ICO) scam orchestrated by an organisation named Company K.

He said he used the financial firm’s platform to transfer the equivalent of AUD119,550 worth of bitcoin to Company K, believing he was investing with a legitimate company. Since the transfer, Company K stopped responding to the complainant and the funds are no longer available.

The complainant said the financial firm should have alerted him to the potential scam and should not have allowed the transfer of his bitcoin to Company K. He is requesting compensation for his losses of AUD119,550.

The financial firm’s obligation to act with due care and skill when executing client instructions requires that it not turn a blind eye if it is on notice of a real possibility of fraud. However, this does not place an obligation on the financial firm to have data scientists and analysts in place to monitor transactions and identify unusual transactions.

The ombudsman accepted the transactions may have reflected unusual account activity for the complainant. She found, however, that this alone did not place the financial firm on notice of the possibility of fraud. The judgment of when a financial firm is on notice must be established on the facts of a particular case and may rely on a range of factors, in particular, circumstances that gives rise to a legitimate suspicion. The ombudsman was not satisfied there were sufficient factors to have put the financial firm on notice in this instance.

While the ombudsman noted the financial firm had access to alerts, such as scamwatch.gov.au , there was no information to support a finding that this would have put the financial firm on notice of the real possibility of fraud occurring. Company K did not appear on this alert at the time of the complainant’s transactions.

Mr K and Mrs K were individual complainants as well as directors of a self-managed superannuation fund (SMSF) corporate trustee company, collectively known as the complainants. The complainants said the financial firm provided them with inappropriate advice.

The complainants agreed to proceed with the financial firm’s advice and established the SMSF, as advised, with a balance of $140,000. They then entered a contract of sale and paid a $39,500 deposit for a property known as ‘Illuminate’.

When construction of Illuminate was completed around October 2016, the complainants were unable to obtain finance to settle to the purchase.

The financial firm said the strategy was appropriate, and only failed because the complainants resigned from their respective employment. This meant they were not able to secure financing. The complainants also withdrew $44,225 from their SMSF in February 2017, which resulted in a smaller balance.

The financial firm was able to find another buyer for Illuminate and obtained a refund of the initial deposit back on behalf of the SMSF. The complainants were not satisfied and sought $95,000 in compensation.

The Ombudsman found that the financial firm’s advice was inappropriate because:

Further, the Ombudsman found that in circumstances where the members of an SMSF have different risk profiles (Mr K had a ‘growth’ profile and Mrs K had a ‘moderate’ profile), the advice needs to be appropriate and have regard to the risk tolerance of each member. This did not occur.

In reaching their conclusion the Ombudsman also had regard to ASIC guidance (Information Sheet 205, published July 2015), which recommends that an SMSF have a minimum balance of $200,000 to be cost-effective (the complainants had a balance of $140,000).